We just finished up one of our biggest projects so far in this house…and I didn’t take ANY progress pictures! WHAT. We hired most of it out and even though it took almost two months to complete, I didn’t take any pics along the way.

I guess because it’s just a wall? But it’s made a big difference in our basement! I have plenty of after pics to share with you at least.

We have a large basement in this house — it’s one of the main reasons we decided to buy and finish this home! This floor plan is really everything we ever wanted or needed! We have so much space to work with in our basement, and it’s been FUN to figure out how to use and build out those spaces.

There’s a spot down there that we’ve deemed the “game room” — mostly for the kids to play or play video games. I shared some of this space a couple years ago when I had this fun art made for our son: 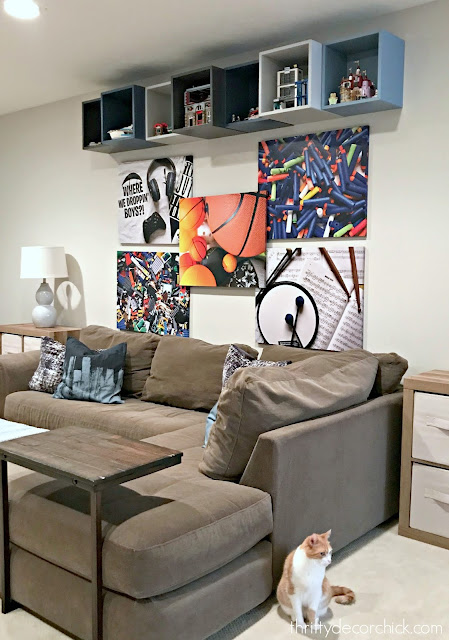 This space not far from our family room down there though, so as soon as we moved in we wondered if we should have had that walled off. You know…a space for the kids and a space for the adults?

We decided to live with it for awhile to see if it was something we wanted to do. In November we decided to go ahead with it and we are THRILLED with how it turned out. 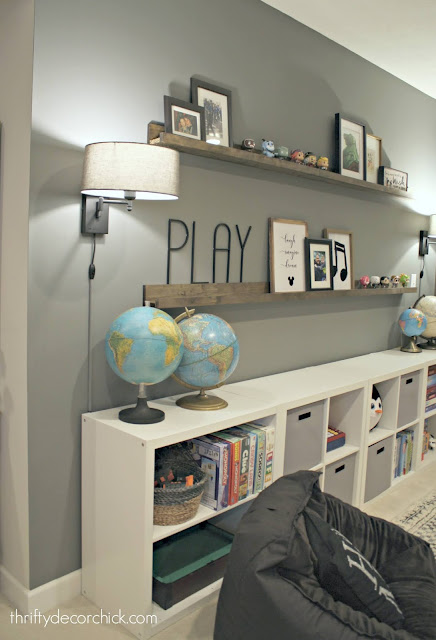 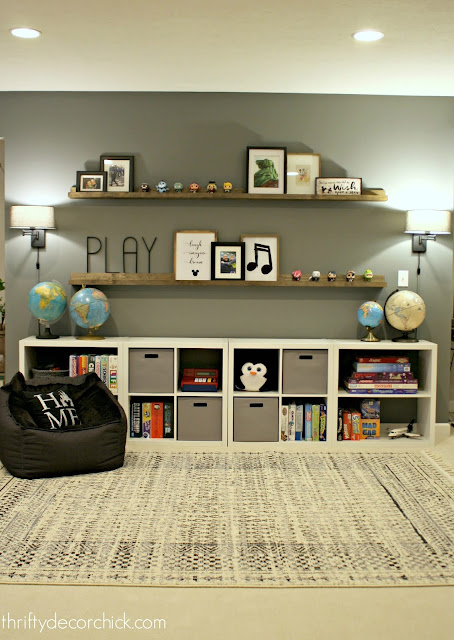 This post may contain affiliate links for your convenience.

It functions so well and looks great!

To the right of that wall is where we put the new one up to close things off a bit. We ordered double glass doors that open into our son’s space: 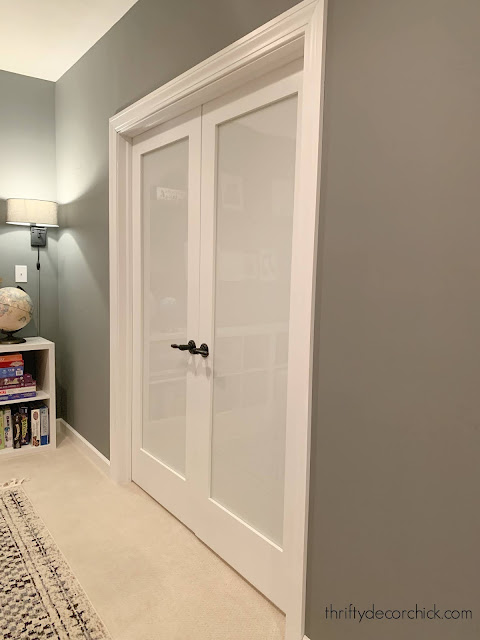 They ended up frosting them by accident (we were going to see if we wanted them to stay glass or I was going to frost them using this method) but we love how it looks.

We had the wall built and then drywalled. I primed and painted the walls and the doors. I had planned to paint the doors black, but we like them in white for now. I still have to caulk the trim and do a few paint touch ups, but otherwise it’s done!

It took a couple months to get this done — contractors are always crazy busy at the end of the year. And anything to do with drywall takes a bit because of the taping, mudding and sanding.

We’ve had the IKEA table that I turned into a farmhouse table down here, but it was small. We sold that and got this gorgeous table instead. It’s the Morbylanga from IKEA: 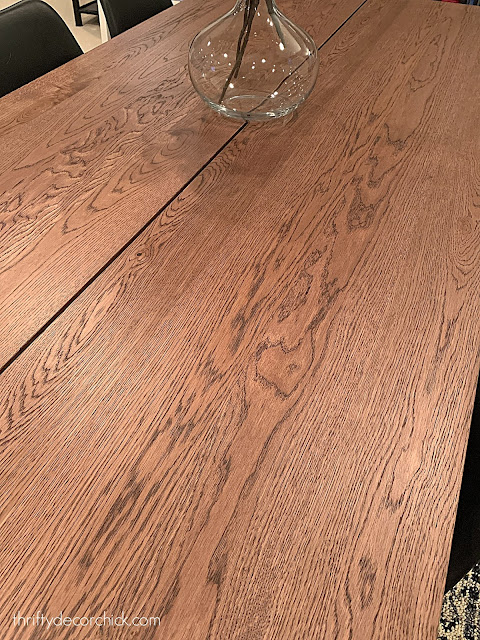 We are so pleased with it! It’s not solid wood, but looks like it. It really is beautiful.

We’re going for a more modern vibe down here compared to the rest of the house, and this is a perfect transitional/modern design if you’re looking for that.

Bonus was that it was incredibly easy to put together: 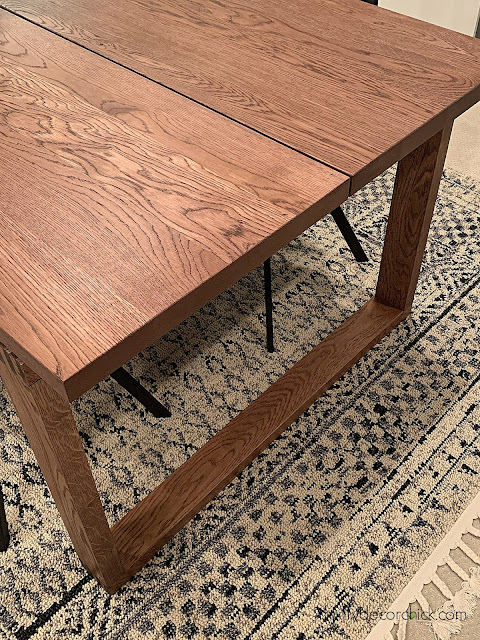 It’s the largest piece of furniture we’ve purchased from Ikea and the quickest assembly!

I’ve wanted these Studio McGee ottomans for at least a year…and they had two in stock the other day. I used my Christmas gift cards to grab them up: 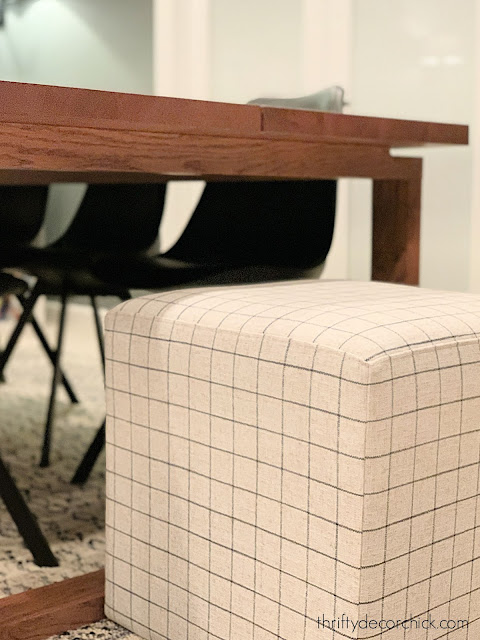 I picked out chairs from IKEA for the table, but our son really wanted these from At Home instead. He’s been super into this little makeover so we went with his choice. They are SO much more comfortable (the seat is cushioned): 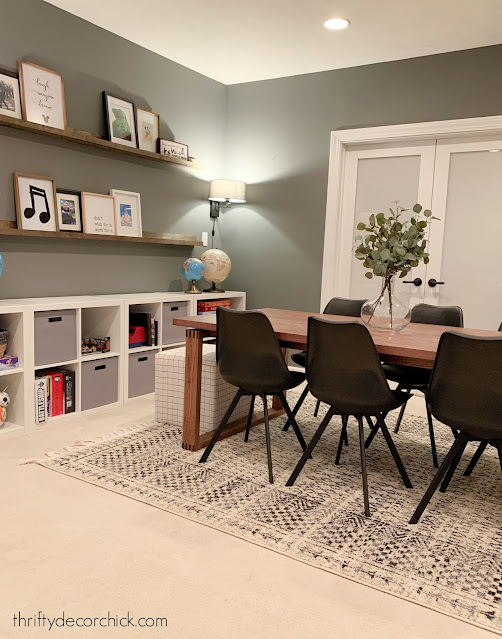 It was actually a smart choice! The closed backs are a great balance to the open table. He’s good. 😉

I plan to add some fun vinyl “game room” lettering for the doors soon. I tried three different art pieces on both sides of the doors, but we all agreed it was too busy. So those walls will be empty for now. I love the simple decor here!

I wish I had more before photos! This is all I have: 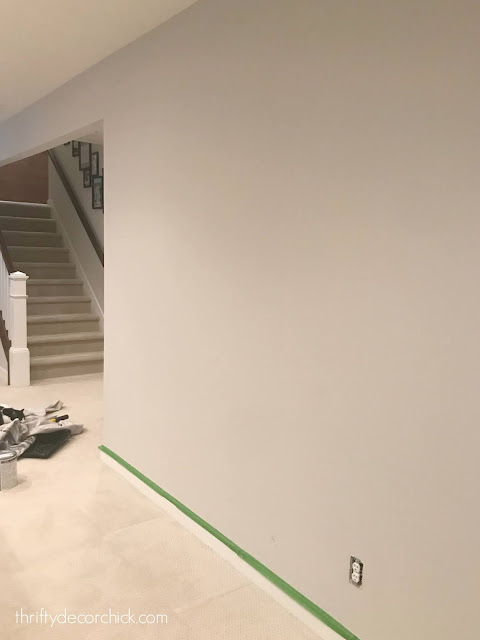 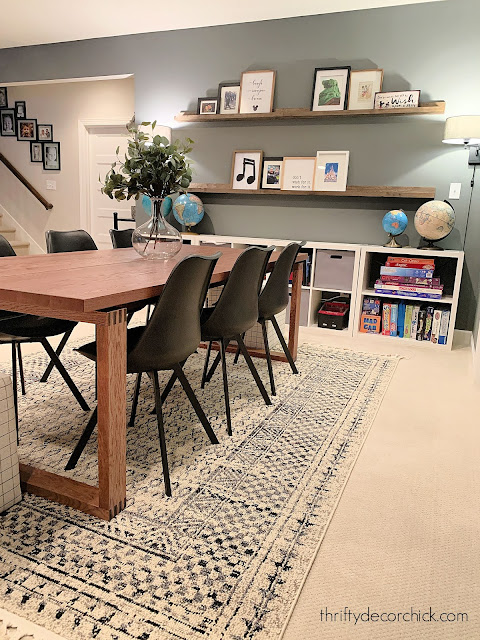 Our son wants me to show you his “new” space behind those doors sometime. 🙂 I can tell he’s getting more into the design of things and it makes me happy! 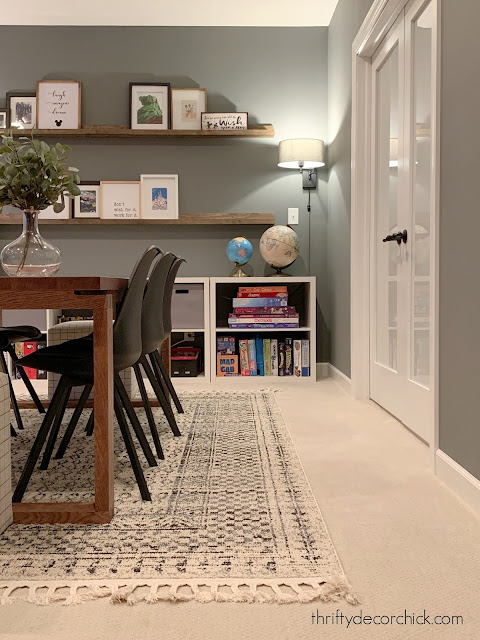 Our son wants me to show you his “new” space behind those doors sometime. 🙂 I can tell he’s getting more into the design of things and it makes me happy!

I almost painted the base of the table black, but I think the chairs are plenty. We’ve already used this table a TON in just a few weeks for pizza nights, Lego assembly and puzzles.

It’s such a wonderful addition down here: 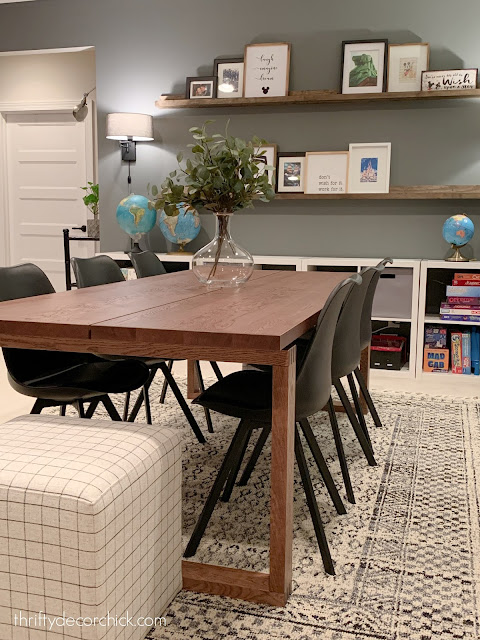 Here’s a before of the wall with just the cubbies: 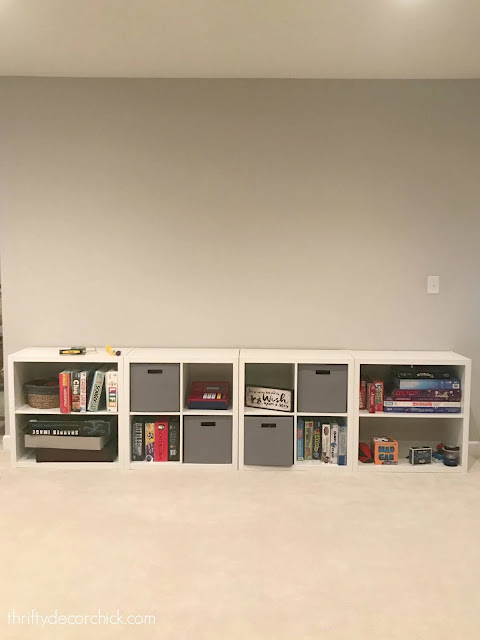 And here’s that view now!: 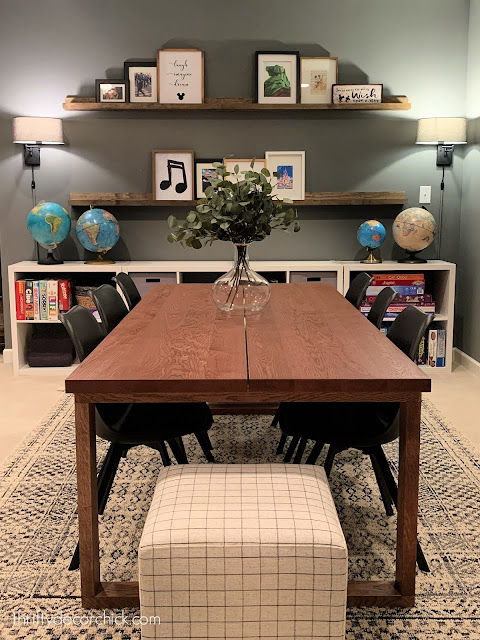 This was the first big “construction” project we’ve added in this house and it feels like it should have always been like this. I love open floor plans, but this one was a little too open. I never regret waiting things out to see how we use a space! Have you added a wall in your home?

Sally black chairs from At Home

Art is a mix of personal photos, Hobby Lobby and Etsy prints

Sconces are from Ikea